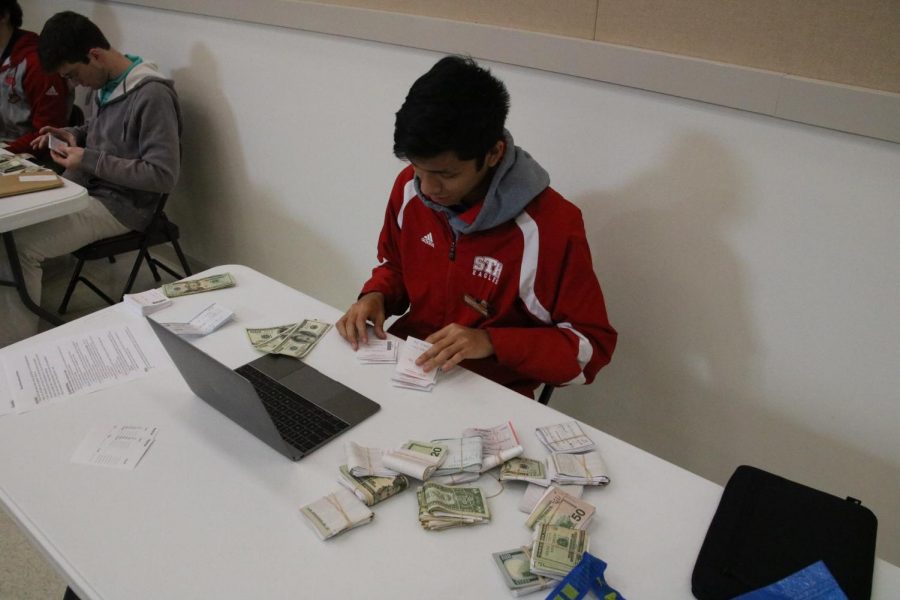 Round Up board member Juan Vasquez '19 counts round up tickets and money after the turn in on February 14th. This was the final turn in to qualify for the 1st quota sellers holiday.

We’re in the midst of Round Up season and this year this there is a new incentive for sellers. If you sell a quota by Thursday, February 14th, then you receive Monday, the 18th off. But for people who do not sell their quota by that date have to be at school on that Monday, not only be there but also have a silent study hall, a “vegan salad bar” for lunch, and working with the fine maintenance staff to help set up Round-Up.

Although this sounds like a fun day, in my opinion, it’s not, right? The Round Up administration is making this day sound like it would be the worst day of school you have ever had. By doing this, they are ultimately forcing the students to sell $300 worth of tickets in three weeks, contrary to the normal amount of time expected to sell one quota in years past which was two months. This not only is unfair in my perspective but also it puts more stress onto all students workload.

I have no problem with a quota seller’s holiday three weeks into selling raffle tickets; power to those who do it. I do have a problem with selling a quota by that Thursday feeling as if it is mandatory and that there is a punishment for not selling by then. The original goal for previous years was for everyone to sell at least one quota in the two months before Round Up which seemed reasonably fair and got us to the goal with the help of some students who went above and beyond. With student population gone down in the past few years, then why does the goal for Round Up keep going up? I do understand that it is for financial aid and ultimately Round Up is a good cause. Making it almost mandatory to sell three hundred dollars worth of Round Up tickets and making that “quota sellers holiday” a day of grief for people who did not sell their quota is wrong, and it needs to change.

For those people who are reading this so far and are thinking that I am missing the point and that the holiday is good for the students, hold on. In 2017 there was a Round-Up holiday for students who sold two quotas but for the rest of the students they had to stay at school and were assigned extra work. This lead to many angry parents, students, and even faculty. There was an apology from the administration and it was a big failure. I believe that this is almost no different and is as wrong.

This holiday should not be a punishment for the students who did not sell their quota in three weeks and it needs to be changed. I believe that it will lead to angry and resentful students and parents. With all of the work, extracurricular activities, and needing to sell a large amount of money in a short period of time, it is unfair to make students sell by then. I do understand it is not technically mandatory but ultimately it is still unjust.