Eagle Baseball Begins Another Season With Big Things In Store 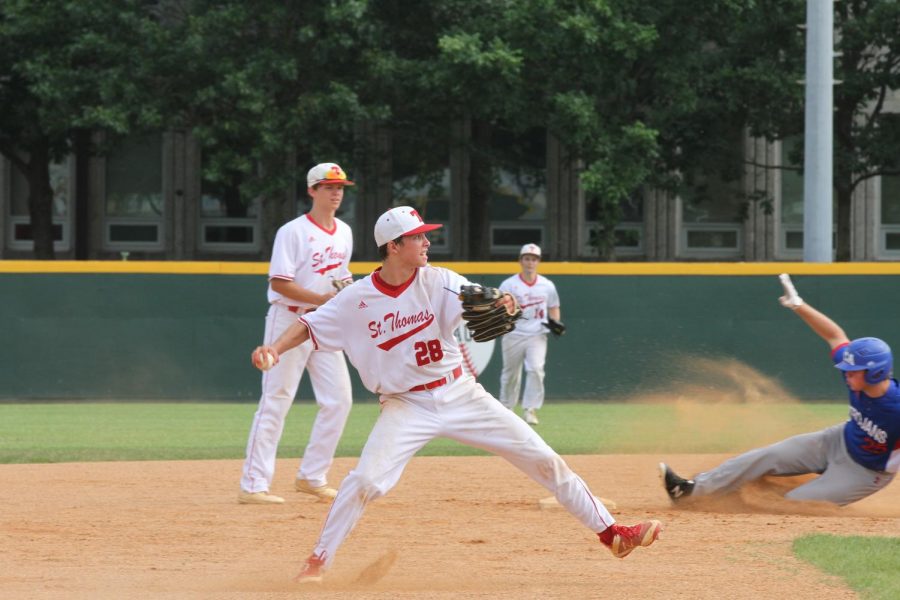 Will Rizzo '21 guns down a would-be base runner at first from his short stop position.

With scrimmages rolling around, the time for baseball at St. Thomas is drawing nearer by the day. Nowadays, the “senior” parking lot is mostly full of cars, whether it be from the players heading to practice, fans coming to watch them in their craft, or scouts coming to evaluate some of our top athletes. Baseball is one of the best sports at St. Thomas, and this year should be big for our guys. Here’s what you should look forward to this upcoming season.

First, of course is the addition of new head coach Adam Massiatte, who built a highly-regarded reputation for himself over at St. Pius X. Coach Lousteau was a dynamo and great coach, but seeing the way Coach Massiatte works his players in the weight room is something that is rarely seen at St. Thomas.

Moving into personnel, Seniors Josh Wolf and Tucker Alch man the pitching staff, and bring forth a new “1-2 punch” element that has been lacking in recent years. Tucker is heading to Catholic University in Washington D.C. and Wolf to Texas A&M. The two players not only have a supreme level of talent, but they also have great chemistry. “I love my teammates,” said Wolf. “The chemistry we have built throughout the years is unprecedented.” This combination of velocity, control, and long legs will prove not only lethal but probably very fun to watch.

Although the team recently suffered a horrible injury in infielder Nicholas Steiner ‘19 (possible ACL tear), there are still a lot of guys up and down the lineup who can smack the ball around.

One such guy is Brody Logsdon out of Huffman, Texas. The fruition of the recruiting talents of the late, great, Gerry Donahue: Brody Logsdon is 6’7” of tough-as-nails and taking care of business.

Another player who is certain to will make his mark this year is senior Tuscan Savarino. Tuscan is a lefty DH with one of the smoothest swings on the team, and has a real knack for putting the ball in play.

Tuscan, as a senior, has seen a lot of baseball and “…believe[s] that this year’s team is stronger all-around than last years, and has a serious chance to win it all.”

Although he has high expectations for the team as a whole, Savarino mentions they’re taking a “Rome wasn’t built in a day” approach. “We are taking practice seriously and going all-out on the little things, so that we are prepared when it is our turn to step up and deliver in clutch moments,” Savarino said.

Unmentioned by anyone above are the underclassmen who are getting it done. So far in scrimmages, Juniors Haden McKeehan and Daniel Coco have been tormenting pitchers, as well as sophomore stud Peter Corbett, who should be on everyone’s watchlist.

When taking into account the players on the field, the coach that guides them, and the atmosphere in the dugout, this team is highly-equipped and mentally prepared to take this all the way to State.