Memes are the new Marketing 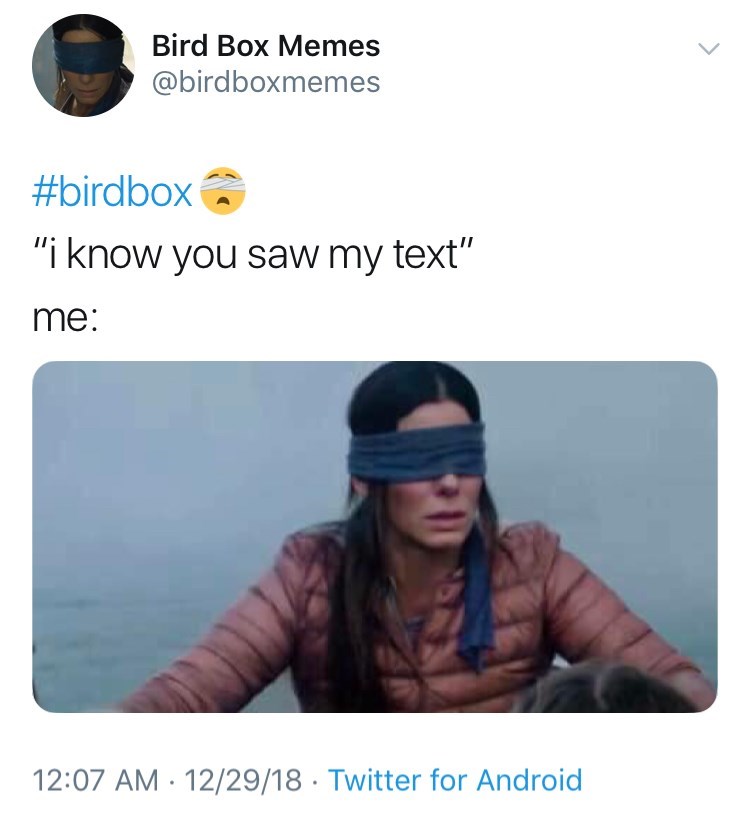 One of the most obvious examples of this is the movie produced by Netflix called Bird Box.  For someone who spends many hours watching Netflix and on social media, the marketing for this movie was easy to see.  However, it was not in its usual form. Instead of the normal trailers and commercials, the marketing was in meme form.

The film was released on December 14th, 2018, but I remember seeing memes before the movie was even released. The most famous meme that was produced was the Bird Box Challenge.  This internet challenge was placing a blindfold over your eyes and trying to navigate through daily activities, or outside as they did in the movie. This challenge became extremely dangerous when people stopped using their brains and started driving vehicles blindfolded, in the hopes of becoming internet famous.  When people’s lives became endangered, the challenge sort of lost its luster. However, it was not long until the challenge was replaced by the memes.

Bird Box is a below-average movie.  It was not horrible, but it was not a fantastic movie by any means.  However, Netflix was able to rake in well over 45 million account views in only 7 days.  That is an extreme number because it means that 45 million accounts watched this movie, which means this number doesn’t even reflect people sharing accounts.  It is safe to say that around 100 million people saw Bird Box in the week after it was released. I did not watch the movie until a few weeks after it was released, so there is no way of truly knowing how many people saw the movie.

The reason the movie exploded was because of the memes and the challenge. Everyone loves to share their opinion about everything, so when people saw the memes, they felt obligated to watch the movie so they could comment on it. Though Netflix does not release its most-viewed original movies, I would bet that Bird Box is Netflix’s record-breaking original movie, and they did not even have to advertise it.  If they did plot making Bird Box a meme and knew what they were doing, then Netflix is a genius at marketing. Being able to reach this number of people at such a small price will be the next big form of advertising.

Another recent example of this form of advertising is Popeyes Chicken Sandwich.  There is absolutely no way that Popeyes could have predicted the scale to which this sandwich would blow up.  The sandwich has been sold out for close to a month now with no word on when they will be able to restock.  All because the sandwich became a meme.

I do not believe that Popeyes was behind the creation of the chicken sandwich meme, but I think their past behavior helped influence the meme.  Anyone who has Twitter knows that the rival chicken fast-food chains have a sort of internet rivalry, and Popeyes is known for being able to roast the best out of the companies, so naturally, people were excited to hop on the Popeyes team when they released the so-called “best chicken sandwich in the world.”  Now, Popeyes does not have enough chicken to keep up with the demand for the sandwich, proving that memes are the new marketing. 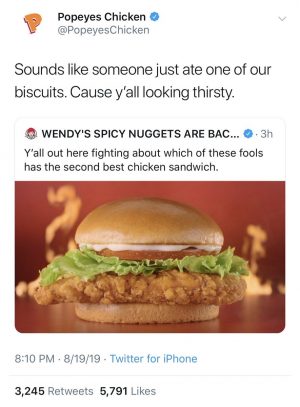