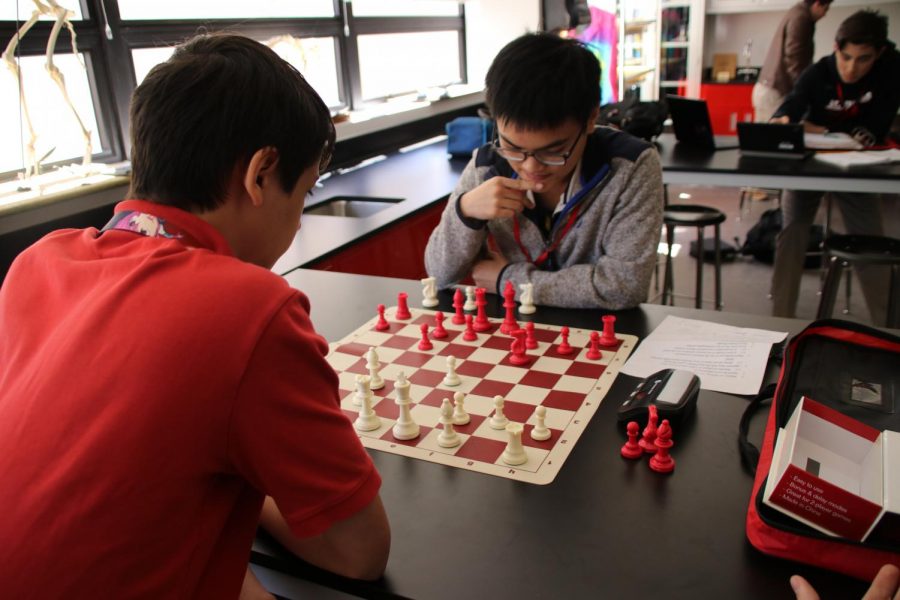 Dat Nguyen '21 and Zachary Voltz '21 play a practice match during the spring semester last year. Both Nguyen and Voltz are making major contributions to this year's team.

The Eagles came up only three points shy of tournament winners Strake Jesuit and more than doubled the point total of the third-place St. Pius X.

“Even though we might’ve been short of the mark this time, our accomplishment shows potential. Chess is a team effort, and when everyone is on the same page, who can stop us? We are a force to be reckoned with, and we’re only getting better, stronger, wiser. With us being so close to the top, look for us to try even harder come May. ” Robert Beaujean ’21 said.

In addition to the team’s success, the Eagles had some notable individual performances as well. Robert Beaujean ’21 placed second overall among high school players while also achieving the milestone of his 25th tournament victory.

“If there is one thing I have learned, which got me to those 25 wins, it’s never over until it’s over. You never quit. Mistakes can be made, during times when your opponent is feeling cocky when he’s up by a lot of material. You just have to stay focused, stay in the zone, and ignore any outside noise,” Beaujean said.

The team was also excited to get the contributions of some of its younger players. Freshman Charlie O’Leary finished just behind Nguyen and Voltz.

St. Thomas High School will play host to the 2020 edition of the Catholic Schools Tournament as well as hosting this year’s tournament at Fall Olympics where it will crown the STH Grand High Exalted Mystic Chess Poo-bah.