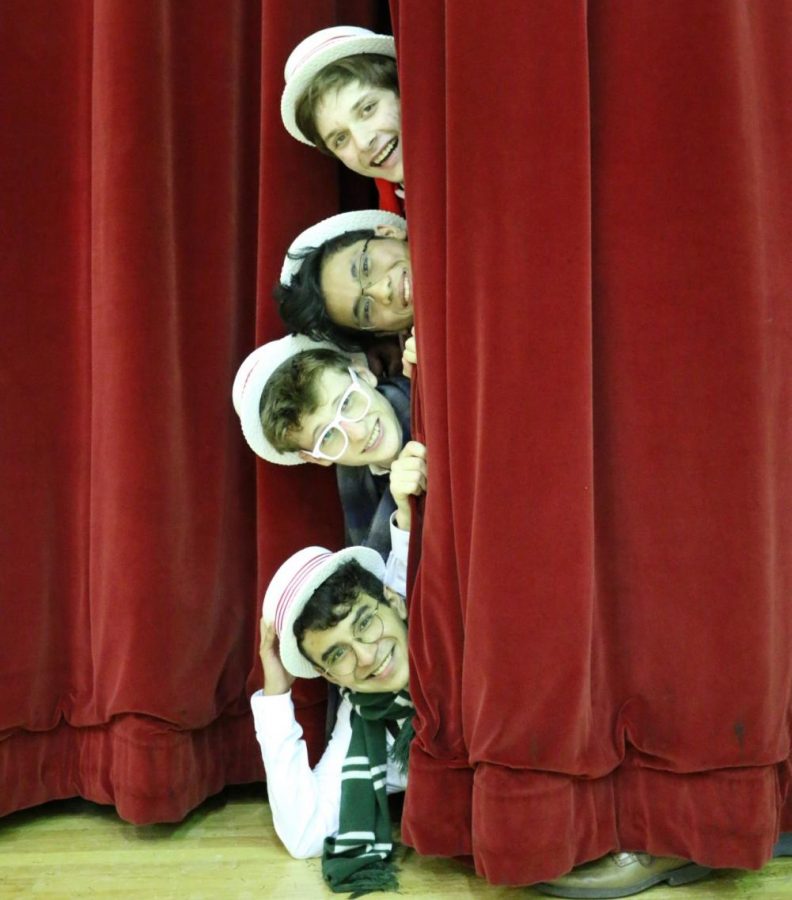 Noah, Leo, Benito, and Raphael began their journey together as members of the choir and wanted to start singing together outside of school in their freshman year. The four of them immediately clicked and began elevating each other’s talents in a major way. They decided to make an official group together in their sophomore year and started brainstorming ideas on what to name this brand new quartet. Raphael tried tirelessly to come up with a name that they all loved and eventually took the first letters of each member’s name, B, N, L, and R, and searched for a word that included each letter. Raphael finally found the word boondoggler, and the group was named the Boondogglers.

The first song they ever performed together was “Blackbird,” by the Beatles, which brought the group together and inspired them to continue singing as a quartet ever since. This quartet also allows Noah, Leo, Benito, and Raphael to use their voices in new and unique ways. In the STH choir Raphael and Benito are tenor ones, Noah is a baritone, and Leo is a bass two. However, this quartet allows them to maneuver in their roles and try new things with their voices. For example, Blackbird requires a tenor one part, played by Raphael, a baritone part, played by Noah, a bass, played by Leo, and then a lead singer, who was Benito. This means that the group can shift outside of their usual roles in the choir, sing in new ways, and express themselves as they see fit. After Blackbird, Noah was the lead in “For the Longest Time,” by Billy Joel, at Round Up, and then Leo was able to choose the song “I Get Around,” by the Beach Boys, and finally, it is Raphael’s turn to choose the next song for the group.

So far in the Boondogglers career, they have sung in four different locations, including the Thanksgiving service at STH, STH Round Up, Hard Art, Cool Jazz, and Duschene. The group says that they enjoyed performing at STH Round Up the most due to the incredible energy surrounding the performance and the support of their friends in the front row cheering them on in the crowd. “With Round Up, there is a different environment… they are more excited. I really liked the energy… I feel like that is where people come if they are truly there to watch the performances, and the people there had a blast.” Leo Wilson said.

When asked who the Boondogglers’ biggest influence is on their style, music choice, and overall aesthetic, the answer was almost immediate, “Us. We curate it, we find the arrangements, we debate with Leo about it, we memorize it, and then we perform it” the group exclaimed. However, they do admit that they do get some inspiration from barbershop quartets, but they decide the songs that they want to sing as a group. The quartet has a system in which each group member has picked out a song that they wanted to perform. This way, every member has a chance to express their talents in whatever way they see fit and support the group behind them.

Due to COVID-19, the Boondogglers have been unable to perform recently. However, the group is looking to record music together both virtually and in a safe environment in person. The quartet plans to “go out with a bang” and sing multiple songs before their time at St. Thomas is complete. Currently, the Boondogglers are working on their rendition of a song that they call “Enormous Eagle” and center it around school spirit. The group remains optimistic about their senior year performances and what they can accomplish. With technology and voice recording, the Boondogglers are looking forward to finding new and innovative ways to give amazing performances to the St. Thomas community and do what they love most.