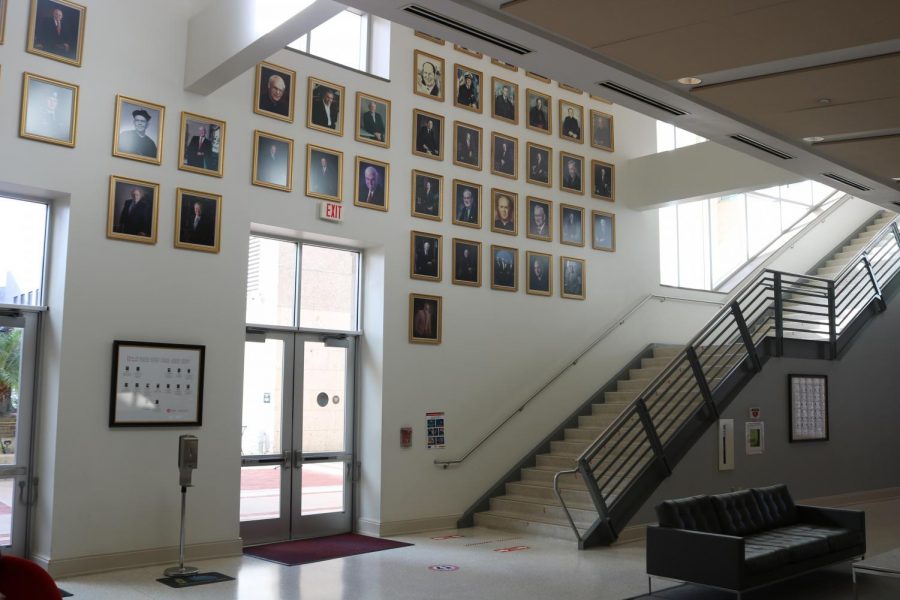 The St. Thomas Hall of Honor is one of the cornerstones of the campus and a central part of every student’s day. It is impossible to go throughout an entire day and not take at least a glance at the impressive portraits that line the wall extending between the foreign language classrooms Cemo Auditorium. They contain the pictures of hundred-plus years of alumni whose contributions to the world and lives led after the Motto Teach Me Goodness, Discipline, and Knowledge have been significant enough to earn them the highest accolade bestowed upon a St. Thomas alumnus. Members are chosen “for modeling a Christian lifestyle, giving of their time and energy, sharing their talents and expertise, helping others less fortunate and always striving to be the best in their life’s work”. Since 1975, when the award was established, to today there have been fifty awardees, beginning with an initial class of thirteen. Ranging from the oldest graduate, who graduated in 1902, to the most recent graduate, 1994, the Hall of Honor spans the entire history of the school. Like the school, the Hall of Honor continues to grow and expand as more and more students come to St. Thomas and graduate to do great things with their lives. On January 23, 2021, the Hall of Honor will grow with five new inductions. These graduates have had exceptional contributions not just to St. Thomas but beyond it including their communities and lives. The five newest members of the Hall of Honor are Raymond Bourgeois ‘70, Albert Clay ‘61, Lieutenant Colonel Timothy Gatlin ‘95, William Joplin ‘54, and the Most Reverend George Shultz ‘63. These men have lived lives that, as Father Wilson said, “by their industry and integrity have been found most worthy.”

Mr. Bourgeois graduated from St. Thomas in 1970 and has continued to live out the values of St. Thomas Highschool ever since. He has served his community generously with over 50 years of membership serving as a mentor in the Christian Youth Organization. In addition, he is the first Black president of the Alumni Association at St. Thomas, while also serving on the board of many other organizations including the Houston Urban League while also being a member of organizations including the Knights of Columbus. He is also a certified G.I.A jeweler and buyer for Wolf’s Department Store and owner of Bushwar Enterprises Real Estate Management

Mr. Clay graduated from St. Thomas in 1961 and since has played a large role in the growth of Houston’s commercial real estate sector through the Clay Development & Construction company that he founded and runs. Throughout his professional success, he had continued to be a proponent of both St. Thomas and Catholic Education. His advocacy for St. Thomas led Mr. Clay and his wife, Dona, towards the largest gift in the school’s history resulting in the naming of Clay-Storey Hall.

After graduating from St. Thomas in 1995 Lieutenant Colonel Gatlin has personified the values St. Thomas espouses including the commitment to mission and determination. Lieutenant Colonel Gatlin is the commander of the 1st Battalion, 37th Field Artillery Regiment, and was named a White House Fellow. one of America’s most prestigious programs for leadership and public service. Lt. Colonel Gatlin has steadily risen through the ranks of command since graduating from West Point in 1999 and his decorations include the Bronze Star Medal and the Meritorious Service Medal.

Mr. Joplin has established prominence in industry and philanthropy since his graduation in 1954. With his brother John , who graduated in 1942, Mr. Joplin has started and sold a variety of energy sector companies. Mr. Joplin has also been extremely generous in his philanthropy, especially to St. Thomas. Including starting a matching gift with his wife Jane that would go on to spark more than 14 million dollars in donations over just 11 weeks. new campus as the Jane and Bill Joplin Campus.

The Auxiliary Bishop of the Archdiocese Galveston-Houston graduated from St. Thomas in 1963 and followed in the religious tradition at St. Thomas by becoming a priest, ordained in 1971. He then went on to become the spiritual shepherd at a variety of local churches.  before being named a prelate of honor with the title of Monsignor by Pope John Paul II in 2000. Since 2010, he has served as Vicar General, Chancellor, and Moderator of the Curia and oversees the largest diocese in Texas and fifth in the nation.